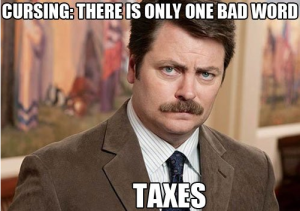 I had a bad day yesterday.

I was going to go in to work an hour early, but my hubby and I were snuggled up so warmly together, I couldn´t bear to leave him and brave the cold. He asked me to make him breakfast, and I did. It was a sweet morning.

I showered and got dressed and as I was about to head out the door, I popped open my laptop to see my paycheck for Friday (they post the paystubs online two days before we get paid).  I was so excited to look at it, all these extra hours I´ve been working, and I´ve been saving and living wisely and I´m paying off debt!  Yeah!

And well then, my eyeballs almost fell out of my head. My paycheck was severely lower than what it should have been. I inspected it closely and there was a large “tax levied.” What is this??

So on my way to work I called my corporate payroll offices, and the guy I spoke to was a condescending jerk. “Ma´am, you owe taxes from 2011. This is meant to be a wakeup call. You need to call the IRS immediately. I see they´ve been sending you notices, but not to the address we have on file for you. They WILL continue to take out the maximum they are allowed to take out until you call them.”  He went on implying how stupid I was and how aggravated he was that he had to speak to me, and then he gave me the number to call.

So I got to work, clocked in, and called the IRS. I was on the phone with them for a total of 1 hour 28 minutes. The woman there was very nice–she sounded sad for me. Maybe this is how they are trained. She said I had claimed an education credit in 2011 but I had not provided the required documentation to prove I was in school that year. (I did take one very expensive collegiate course that year.)  They just noticed it in 2014.

So here´s what happened. From 2009 to 2012 I used to use this really sketchy tax lady. Everyone in my office used to use her (I found out several of my coworkers still do) because she got us so much money back. Ding ding ding. Hello, warning sign.  Everything she does is under the table. Her name does not appear on any records anywhere. She submits everything electronically on my behalf, as if I had done it myself. Nowhere is her name to be found. The only trace of her is that when I get my refund, it´s set to auto deposit $100 into her bank account and the rest into mine so “I don´t even have to pay her.”

Anyway, I knew she was sketch, and when Michael and I got married in 2013, we started using his tax guy. A very nice official man in an office. Before we filed our 2013 taxes this year, I had received a letter about the education credit. He said he would take care of it. He filed our taxes and sent me a copy by email, and I noticed he had our address wrong. I emailed him back and he said he corrected it.

Now here we are at the end of 2014. The address the IRS had on file was the wrong one my new tax guy had initially submitted. The IRS says it´s my responsability to make sure they have the right address on file for me… even though my W2 that I submitted has the correct address.  Okay.

It turns out, if I can´t provide the documentation they need, I owe them like $2500 for the education credit, $400 in late fees, $400 in interest (that has been accruing since 2011 even though they didn´t find the error until 2014), and now a new $120 for having called the IRS at all. The nice lady put me on a payment plan of $50/mo and they´re not going to garnish my wages anymore.  If I have to, I´ll just pay it off when I get my refund this year.  She corrected my address and sent my employer a letter, so I might get the money back that is missing from this paycheck (she couldn´t guarantee), but I know that if I do, it´ll probably be next week at the earliest.

They´re going to mail me copies of everything in writing to my correct address.  Once I get it, I´m going to meet with my new tax guy.  If I can actually provide all the documentation they need for me to have gotten that credit in 2011, this all goes away.  I kind of want him to pay the late fees and interest himself… he said he took care of it, and I never got subsequent notices because he didn´t correct my address.

You remember the Game of Life we used to play as kids?  And how all of a sudden it was like, something stupid happened and you got set back, just because?  Whatever.  That´s life.  The IRS is stupid, and so am I.

16 thoughts on “The Story of a Setback: Stupid IRS and Stupid Me”