My godparents (left), me and my parents (middle) on my baptism day! 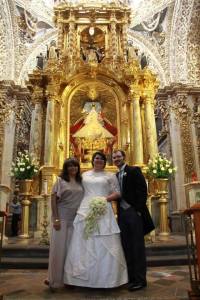 I got married in the same church I was baptized in!

The quick back-story: After college, my mom briefly managed my grandpa’s business in Mexico, but when she got married and moved to the US (my dad was Mexican, too, but already lived in New Orleans), she became a SAHM, and loved it. My dad was a successful entrepreneur. I have basically zero knowledge of the state of their finances throughout my life.

But then my dad suddenly died when I was 18 (10 years ago), and she had no idea what to do, financially or otherwise. I’m under the impression that she lived off of savings/life insurance payout for the first two years after he passed away. All I know is that at the end of those two years, she had gone through a deep depression, and was basically out of money, had maxed out all her credit cards, and was on the verge of losing our house, which now carried two mortgages. Oh yeah, and right before my dad died, because of his illness and because they were joint owners of his company, they filed for bankruptcy. Because 7 years of bankruptcy was better than inheriting his debt burden? I don’t know who advised them to do this or why. No clue. I was totally out of the loop on everything financially-related with my parents until maybe 3 years ago.

My mom is a smart lady, but admittedly never dealt with managing any finances in her adult life—at all—and she lost my dad and the love of her life very suddenly, and painfully.

Okay. Here’s where MY MOM IS AWESOME comes in. Yesterday, I was talking to her on my drive home, and it really dawned on me—her journey has been incredible and inspirational.

After those very dark two years, her best friend (my godmother) kind of forced her to get a job. My mom has always loved to sew. She´s made so many wonderful things for me, from my baptismal gown (see above), to play clothes when I was a kid, to prom dresses as a high-schooler, curtains and pillows and bedspreads when I moved to an apartment… she even made my gorgeous wedding dress (again, see above). She´s kind of awesome at sewing and creating—but best of all, she loves it. And so her friend was working at a fabric shop, and my mom started working there.

Y´all. She had never worked before. Here she was at 55 years old with a boss for the first time in her life, and a schedule, and a uniform. I can´t wrap my head around how jarring the transition really was for her.  It took time, but she came to love the job. She got to play with beautiful fabrics all day long and consult on projects customers were working on. And you can imagine, having a reason to get up and look decent every day worked wonders for her state of mind.

My godmother told her daughter and daughter´s friends that my mom could sew, and suddenly she was making window treatments, pillows, bedspreads, table runners, you name it, for these young families. As you know, word of mouth spreads like wildfire. My mom´s work is stellar and her prices (especially at the beginning) were very low. Before I knew it, she was the hot new thing among a certain group of young women who were basically all new home owners, decorating their interiors for the first time.

SHE LEARNED SOME MORE

And in time, as you might imagine, she had enough side projects to work on that she decided to leave the fabric store. At first, she would work side by side with friends she had made who already had big businesses sewing, and enormous workrooms. She learned their tricks for doing things more quickly and efficiently. She learned new styles and designs. She even learned to reupholster furniture (but decided she didn´t really like it).

THEN SHE SET UP SHOP

And in time, she cleared out our garage, built herself an enormous table (which is absolutely necessary when making drapes—they´re so long!) and bought a couple of industrial-grade sewing machines (that she found on Craigslist!). She still occasionally works for friends or friends of friends, but now she mostly works for interior designers.

I had no idea this was even a thing. These families hire an interior designer, move out of their houses for a month, and when they come back, the whole thing is re-done. The designer buys furniture, paints, puts up new curtains—everything! What´s really happening is that the designer is outsourcing a lot of this stuff, but for the client, it´s great to only have to work with one person whose tastes they trust.

THEN SHE GOT SMART ABOUT HER BUSINESS

Transitioning to primarily working directly for interior designers was a great move for my mom, because she´s always been a little intimidated by negotiating prices with end-customers directly. She´s too nice and she falls in love with every young couple she meets. She never wanted to charge them “too much” because they´re young, and they have kids, and on and on. And she got tired of installing the hardware for window treatments herself. By working with a handful of interior designers regularly, she doesn´t have to deal with the end-installation, or  difficult clients, and she´s more comfortable negotiating prices with the designers because she has long established relationships with them now. She realizes she´s a total ace in these designers´ pockets, and charges them accordingly.

Her work has been so good that she has never really had to seek out new clients, really. She still gets some jobs from friends sometimes, but for the most part, the interior designers she works with keep the projects rolling in.

AND FOUND HERSELF A SIDE HUSTLE?!

And so I was really surprised when about a year ago, she told me out of the blue that she had gotten a new job. She had heard about a new store that was about to open that was going to sell ready-made window treatments. They were still renovating the building preparing for their grand opening, but she just went and walked on in there. She told them they were going to need a good salesperson, and that she knew the business inside and out, and that she wanted to work for them, making $X/hour. Oh, and she told them she only wanted to work 3 days/week. …I´m guessing they were stunned. They hired her on the spot! Hahaha! They just said, “okay.” I laugh every time I think about this. I can imagine she got the job primarily as a result of her abundant confidence.

I was so happy for her and proud of her, but a little surprised as to why she would do this. She explained to me that this is basically what we would call her “side hustle.” It´s very easy money for her, she mostly gets to sit in a beautiful chair all day (remember, she´s almost 65 now), and then wow customers with her fancy talk when they come in. Maybe this shop was going to hire someone anyway, maybe they were just going to run it themselves. Who knows. They have very few employees but they make a lot of money. And I´m proud to say this is in large part due to my mom.  She helps these customers paint a picture in the heavens—she helps them envision the home of their dreams—which includes all these ridiculously expensive window treatments. She´s not just selling curtains. She´s selling comfort, aesthetic pleasure, happiness. Yeah. They love her.

SHE´S IN A GREAT INDUSTRY

What´s crazy to me is how much people pay for curtains! Can we talk about that for a minute? My mom is about to wrap up a very long project she´d been working on for a friend whose house burnt down and needed to redecorate a big new house, starting from scratch. And this is the conversation that spawned this blog post. My mom said to me, “I´m about to finish Linda´s bedroom, and that´s the last room of that house. It´s a smaller room, so I´m only making 3.” To which I responded, “3 what?” “$3,000.” I laughed and couldn´t believe it. My mom´s a beast.

And who knows how much the store she works at charges for their curtains! She often laments she can´t steal the clients from the store. She says they´re paying so much more for the ready-made curtains in the store than she would charge them if she made them. But! She really does not want to get her “hands dirty” by working with end-clients who are strangers.

Not only have the 7 years of bankruptcy passed, her credit score is now super. She´s renegotiated rates with her credit card companies. She slashed expenses left and right. She did some kind of Obama thing with the mortgage on the house so that now it´s only one note, and a very manageable one. She´s paying off debt super aggressively, she works on her own schedule and comes and goes as she pleases. She takes days off whenever she needs a break, and even outsources some of her simpler work. She uses the method you guys often talk about, where all her bills are paid a month in advance. She´s been doing all this fine work right under my nose, and I hadn´t even really noticed. I couldn´t be more proud.

Is there someone in your family who has made a great comeback?  Or who has been a great financial role model from the start?  Were you aware of the exorbitant amounts people are willing to pay for “window treatments”?  Tell me!

16 thoughts on “My Mom Is Awesome”