This past weekend, Michael and I were in Dallas, both vacationing and staffing a quizbowl event.  It was the Middle School National Championship Tournament, and it was a lot of fun.

I was completely prepared to come back and write a neat, little post about how to have fun on a budget while spending a weekend in Dallas.  I was going to tell you about the frugal shuttle and the lovely meals, on and on. 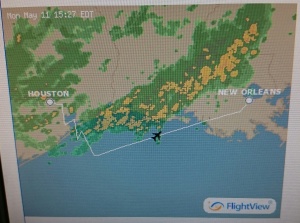 Once Michael finally got on a flight, this was his path

We were scheduled to fly out of Dallas yesterday evening, both around 930pm, Michael to NOLA, me to Houston.  Around 7am I got an automated phone call that my flight had been pushed back to 1130pm.  I always sign up for the automated alerts.

We wrapped up our quizbowl duties around noon, and decided to walk over to the airport to check out lunch options.  (The hotel was attached to the airport, and there wasn´t much to eat in the hotel itself.)  All the food is past security, so we decided we´d check in, and go eat, and then head back to the hotel to relax until it was time for our flights that evening.

(I should have prefaced all this by saying Michael and I are extremely experienced travelers, and I think, never in all my years, had I dealt with delays like we did yesterday.)

So we try to print our boarding passes but the kiosk says our info is unavailable.  We decide to check with the AA counter, but the line is about 500 people long, at least.  No joke.  This line spanned the length of the terminal, and then some.

But we had nothing else to do, so we got in line.  Then I decided to call AA and see if they could help me out.  The recording said the wait time to speak to a representative was 1hr 57mins, but that I could enter my phone number and receive a callback when it was my turn in the queue.  So I did.

And we waited in the line.  And eventually the 2 hours passed and I received the callback.  (We had not moved up even a third of the way through the line.)  Turns out, both of our flights had been cancelled, and we were never notified.  The agent on the phone rebooked me for a flight at 345p (my next option was for 10pm the next day), and Michael for one the following morning at 10am.  I told her there was no way I was going to make it through this line and through security in 1hr45mins, but she was confident I would.  Also, because the delays were due to weather, they couldn’t compensate the extra hotel night we´d have to pay for Michael to have to stay overnight.  I knew the extra hotel night would run us about $200.  The lady on the phone said at the counter they might give me a voucher.

So we continued to wait in line.  Another 2 hours passed.  I, of course, missed the flight I had just been rebooked for, and we still weren´t in the front half on of the line yet.  Here it is around 4pm, and we´re still waiting in line.

We finally took action.  We decided to rent a car, and drive back to Houston.  This way I wouldn´t be late to work, Michael could stay the night at his brother´s for free, and he could hopefully be rerouted to fly home from Houston instead of Dallas.  We figured our options were to either pay for a night at the hotel, and I´d miss a day of work, and we´d maybe make it home the next day, or pay for a rental car and drive to Houston.  At least that way I´d be able to go to work, and Michael could stay with his brother as long as necessary.  It´s only about a 3.5 hour drive from Dallas to Houston so the prospect didn´t seem too daunting.

What was most upsetting was that if we hadn´t been hungry and walked over to the airport, we never would have known our flights had been cancelled!  We had already checked in online the day before, and never received any notification other than that mine had been delayed.

Anyway, I never rent cars, so I had no idea what this process would be like.

I guess we weren´t the only ones with the same idea.  We went down to the car rental area, and all of the rental agencies were “out of cars” (I call BS on that one) except for Hertz, who was loudly announcing they only had pickup trucks left.  We figured, who cares, and waited in that line.  When I finally got to an agent, she said they did have cars.  The cheapest was a midsize.  For one day, this was going to run me $210 plus gas.  Okay.  We had no other options.  My frugal side was screaming, but my logical side knew this was the best way.

We got the car and finally headed out, around 445pm.  Keep in mind, we had gone to the airport because we were hungry at noon.  At this point we were famished.  We got on the road, and then stopped at a McDonalds, and ordered basically one of everything on the menu.  Haha.  Okay, maybe not that much food, but close.  We were starved.

And then we drove to Houston.  We set up the Bluetooth and were on hold for 1hr44mins to talk to someone at AA about rebooking Michael again, and when an agent picked up, they hung up on us.  We called back and set up the call back thing.  About an hour and a half after that, as we were arriving in Houston, we got the callback.  She was able to reroute Michael to leave out of Houston the next morning 835am (going through Charlotte to get to NOLA…), and she even went so far as to refund me $88 (half the original cost of my ticket), after I explained to her what happened.  I thought this was super nice, considering they usually don´t refund anything for weather related delays.

So I take Michael to the airport this morning, we get there around 7am, I drop him off and head to work.  Then he calls me that his flight was pushed back to 930am.  He gets his boarding pass, goes through security, and at the gate, they tell him he has been rebooked on a different airline for a direct flight to NOLA at 1030am.  Again, never notified of any of this…  He gets there, that one is delayed til 1230pm.  Then he boards the flight, and they sit on the runway til 145pm.  Poor love finally made it home at 345pm.

All of this to say, if things had gone according to plan, we wouldn´t have spent an additional dime, and would have been home last night.  Instead, I came out of pocket about $250 for the rental car with gas (though I´m getting $88 back), and Michael got home 16 hours late.

A FEW REFLECTIONS ON ALL OF THIS

Have you dealt with any extreme delays or rerouting recently?  Do you think some airlines are better at handling it than others?  Is this small potatoes compared to a wacko travel experience you´ve had?  I want to know!